I was a teenage gun runner

Stuart Round, a nice, ordinary 30-something bloke from Nuneaton. But for 15 years he kept a secret - as a youth, he regularly risked his life to smuggle arms to the ANC in South Africa during the apartheid era

"Nice truck." The South African border guard considered it with almost lascivious interest. The model Bedford of the type once popular in the British army was entering the country on the last leg of a 7,000-mile safari from Nairobi to Cape Town. There were 18 tourists in the back, one tour guide in the front, and a ton of AK-47s hidden under the seats. It was 1986, at the height of the sanctions against apartheid.

The British driver, Stuart Round, 19-years-old and in a state of consolidated terror, weathered the guards' interest in the group's European passports. Then he was asked if there were guns on board. The answer he gave seemed to amuse them. After a brief lecture on the perils of driving unarmed through black Africa, the guards waved them on, brightened by another small instance of British stupidity. The driver allowed a smile too. Easing the truck into South Africa, his passengers bumped along in ignorance of the role they had just played in the African National Congress's plans to overthrow the white government.

Fifteen years later, the story of how 30 tons of weapons and ammunition were smuggled into the country by, among others, an A-level student from the Midlands, has been rescued from obscurity by South African television. David Brown made Secret Safari, broadcast in South Africa this week, after learning that his father, Mannie, had helped to set up a travel agency in London which for seven years was a front organisation for transporting guns and ammunition into the hands of Umkhonto weSizwe, the armed wing of the ANC, in the days when war in South Africa seemed inevitable.

While Brown and his partners worked on converting a truck and soliciting legitimate backpackers as decoys, Stuart Round was emerging from an "orthodox, middle-class upbringing" in Nuneaton, Warwickshire. His father was an RE teacher, his mother an office worker, and Stuart was taking what was then a common route to rebellion, from sociology lessons to membership of CND, to anti-apartheid demonstrations outside his local Barclays bank branch and the market stalls that persisted in selling Cape apples. His parents thought they were through the worst of it when, at 19, he dropped out of school, severed links with his activist friends, moved to London and got a job in a travel agency.

What they didn't know was that it had been set up by the ANC. The agency, Africa Hinterland, had premises in Greenwich High Road, south-east London. "We had a budget of £80,000," says Mannie Brown. "That was to buy the vehicle, convert it and get it to Mombasa. We bought a second-hand Bedford and converted it on farmland near Ipswich. My nephew did all the welding."

A glossy brochure offered a seven-week safari for £700. For those reluctant to break santions, there was a five-week option that terminated short of the border. "Underseat storage for foods supplies, camping equipment, tools, spares etc . . ." the brochure boasted. It omitted to mention the five-metre cavity in which arms would be hidden when the truck stopped for "servicing" in Lusaka.

Round is 33 now, an aerial photographer who lives in Nuneaton, still wearing the 11-hole boots of his demo days and smiling shyly beneath his freckles. "I was approached through friends of friends," he says.

"They said I was being recruited for 'something political, abroad'."

He got the train to London and was interviewed by Mannie Brown. "He was very young, but incredibly mature for his age," says Brown. Round had to keep his activities secret and accept the fact that he might never be able to share them. If he got caught en route , he was to tell his interrogators that he thought he was smuggling computer parts past sanctions and had no idea it was guns. He was prepared for imprisonment or worse. "The situation in South Africa was so stark. They needed guns and that was very clear cut to me."

Round took a six-week tour of Europe to get stamps in his passport and give him something to talk about with the passengers. He went to Ipswich and learned how to work the truck's secret compartments. He was trained in counter-surveillance - how to monitor people in shop windows and raise the alarm if he was being followed. Finally, he learned to drive.

There was no margin for error. In Cape Town, a two-week period was allocated with a daily, 15-minute window cleared for the weapons drop. If he missed it, the guns would have to go back. "The sanctions caused us major headaches, because Tanzania had a closed border policy. If you were going to, or had been in, South Africa you were not allowed in Tanzania. To bring the vehicle back north, we had to have two passports and two sets of vehicle papers."

As for Round, he came back to Britain and drifted for a bit; the only marketable skill he had learned in Africa was truck driving, although, he says, you never know when stripping an AK-47 might come in useful. Three months ago he finally told his parents what he had done. They were chuffed, he says.

"While I was driving, it had 100% of my effort. I'll never put as much into anything again, and nothing will demand it of me. I've done nothing since in terms of political activity. I've done my bit."

This interesting report by the BBC, about the truck used for the "Secret Safari" arms smuggling operation, somehow manages to avoid mentioning that the drivers and tour guides were all white non-South Africans, mostly British people, acting in solidarity with the ANC. 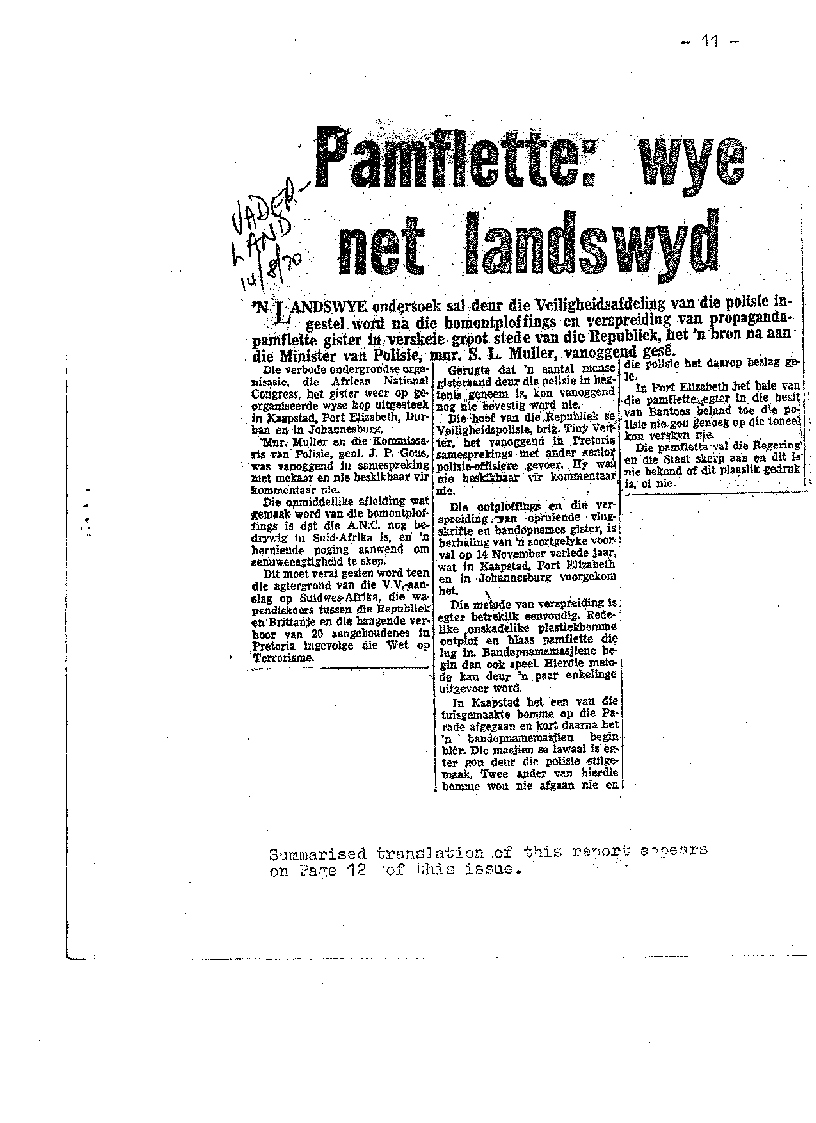